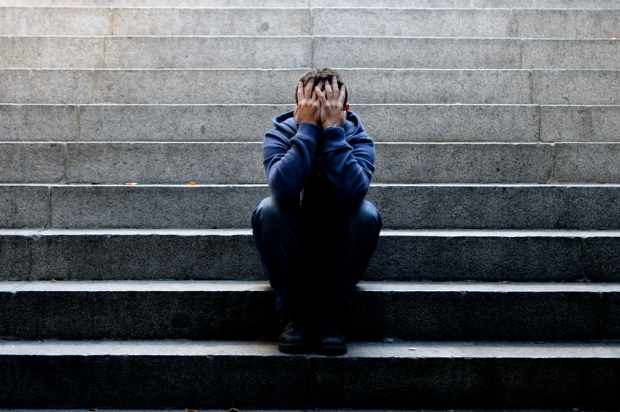 “Don’t fret or worry. Instead of worrying, pray. Let petitions and praises shape your worries into prayers, letting God know your concerns. Before you know it, a sense of God’s wholeness, everything coming together for good, will come and settle you down. It’s wonderful what happens when Christ displaces worry at the center of your life.” ~Philippians 4:6-7 (MSG)

When I was with you last I was going on about freedom and how important it was for us to understand that Jesus came to set us free from sin. I also said I would get to “the most universal of all addictions” which is summed up in one word…worry. Worry is a verb that, according to The American Heritage Dictionary, means to feel uneasy about some uncertain or threatening matter; be troubled. Be troubled…hmm somehow I remember a story about a king-wanna-be saying he was troubled when a bunch of dudes showed up in his throne room and told him about a King that had been born. His worry leads him to what history calls “The Massacre of the Innocents.” Anyway…

Worry is something that gets done by us all in some way, shape or form. It can happen in the smallest way just as much as it does in the biggest. 20th Century theologian, John Stott comes right out and says that “worry is waste—a waste of time, thought and nervous energy.” Worry is so engrained into the human condition that we justify its existence much like other addictions however Jesus made it a point to address this “universal addiction” when He gave His Sermon on the Mount. He begins the dialogue with this key phrase, “No one can serve two masters. For you will hate one and love the other; you will be devoted to one and despise the other. You cannot serve both God and money.” (Matthew 6:24)

Then Jesus will tell folks not to be anxious about their lives, what they’ll eat, what they’ll drink, and what they’ll wear. Now during those Roman Empire times dem’s was some everyday “where’s it gonna come froms” and now this guy says don’t worry about it ‘cos even the birds get fed by the hand of God. ALRIGHTY THEN…but Jesus doesn’t leave them hanging on thread, AU CONTRAIRE, He gives the straight up deal right here, “Seek the Kingdom of God above all else, and live righteously, and He will give you everything you need.” (Matthew 6:33) So basically it is matter of perspective. Doom along the horizontal and hope in following the vertical.

Now don’t go sitting there thinking that I am advertising a worry-free Gospel and that I think this Christian life should be free of it, once again I say AU CONTRAIRE because there are things we can take worry or anxiousness to. We should take thought

That about does it for me today but I am not completely done covering the universal addiction of worry. Next time I am with you I would like us to spend some time gleaning why Jesus made it a point to tell those in attendance during His Sermon on the Mount why being anxious in our everyday lives stunts our growth of faith. Until then why not take a look at Matthew Gospel 6:24-34 and see for yourself why Jesus would have use consider the issue of serving two masters. I think it is plausible to think that He knew that people had an enslavement to material security (we still do, don’t we?) and He came to give us assurances that set us free from stuff that has no eternal value. Bottom line…if it serves no purpose in eternity it is eternally useless. Amen?

Written by Chris Hughes: Chris, a graduate of The Colony of Mercy (11-2003) is married (Kathy) with two adult children (Kevin and Karen) and has been a Freedom Fighter contributor since 2008.

Daily Quote: “God never intended His people to become prisoners to worry. Such an unbelieving, energy-draining addiction strangles our faith and makes us unable to bear fruit.” —Charles Swindoll.

35 Who shall separate us from the love of Christ? Shall tribulation, or distress, or persecution, or famine, or nakedness, or peril, or sword?36 As it is written:

“For Your sake we are killed all day long;
We are accounted as sheep for the slaughter.”

37 Yet in all these things we are more than conquerors through Him who loved us.

“Be anxious for nothing, but in everything by prayer and supplication with thanksgiving let your requests be made known. And the peace of God, which surpasses all comprehension, shall guard your hearts and your minds in Christ Jesus.” ~Philippians 4:6-7 (NASB)
Although the movie “Braveheart” had its inaccuracies concerning the life of that infamous Scotsman, William Wallace, the one quote that stood out for me was “They may take our lives but they’ll never take our freedom!!” and then they go into battle. The word freedom has become a precious commodity to all of humankind. Many wars have been fought for this idea of freedom. Over time however, man has polluted freedom as a privilege by the decree of one constitution or another instead of treating it as it was intended to be…a gift given to us by God. Now don’t go getting’ all nutso with me by Americanizing it, freedom is a gift from God period!
The formula is simple, God made us with minds so we can think freely, He made us with hearts so we could love freely and He made us with wills so we could obey freely. Our God wants us to be able to choose the way we should go instead of putting a ring in your nose and dragging our fanny perpendicular’s down the road. Now nothing can please The Father better than choosing Truth, the life that is found is Jesus and to freely obey and worship Him BUT there is a downside to this gift of freedom. The freedom to reject all this and hit the dead end of freedom out of control.
In the 8th chapter of John’s Gospel we find Jesus trying to explain what will actually bring freedom to the Jewish nation but in their typical “that’s certainly not us” fashion they fall back on being children of Abraham and therefore absolved of any connection to evil to which Jesus replied, “I tell you the truth, everyone who sins is a slave of sin.” (John 8:34) This is the same mindset that beleaguers Christendom today. Most pew warmers are content to say “that’s certainly not us” all based on agreeing with a Pastor’s sermon, writing a tithe check and just being in God’s House. That’s all fine and well but it ain’t enough.
The truth here to understand is that Jesus Christ came to set us free and we can find His job description in Isaiah 61:1-2a. But if really you wanna see freedom in action turn to Luke 4:16-21. Jesus walks into a synagogue in Nazareth, is handed a scroll, rolls it open and points right at the prophecy of the “favorable year of the Lord”, then sits down and says, “Today this Scripture has been fulfilled in your hearing.” Now when I went looking for the “truth” about myself I found this web thingy called Truthfinder and when I plugged in my name in I found that I had 6 possible criminal records and if I gave them about thirty bucks I could get the complete report. I think I’m keeping my loot.
I’m not saying that there aren’t a possible 6 criminal records bearing my name but what I am saying is that Jesus Christ came to set me free from that payment because the bottom line is I ain’t got enough to pay for the actual sin nature of those records. If I were to use my “go to” for an answer I’d find myself in James 2:5, “Listen, my beloved brethren: Has God not chosen the poor of this world to be rich in faith and heirs of the kingdom which He promised to those who love Him?” So why bother with Truthfinder in the first place? Anyway…
There is a lot more to say about freedom but I’m outta time today. Bet you’re wondering why my title ain’t matching the content of this Freedom Fighter, well I’ll be getting to it, don’t you worry about that. Until then I ask you to think about something today and it is a quote that comes from an 18th century French philosopher. Jean-Jacques Rousseau said that, “Man was born free, and everywhere he is in chains.” Sad…but true. When I am with you again we’ll cover what Charles Swindoll calls “The most universal of all addictions.” Hopefully it hasn’t got that much of a hold on you. Amen?

Written by Chris Hughes: Chris, a graduate of The Colony of Mercy (11-2003) is married (Kathy) with two adult children (Kevin and Karen) and has been a Freedom Fighter contributor since 2008.

Daily Quote: “The Constitution may be, as Gladstone said it was, the noblest document ever struck off by the mind of man. But we must remember that there are countless thousands of Americans who use it merely as a place to hide when they are caught in some act of iniquity. Liberty as used by the founding fathers meant freedom to do good; many today conceive it to mean freedom to do evil, and they work it for all the traffic will bear.” — A.W. Tozer

Who shall bring a charge against God’s elect? It is God who justifies. Who is he who condemns? It is Christ who died, and furthermore is also risen, who is even at the right hand of God, who also makes intercession for us.~Romans 8:33-34