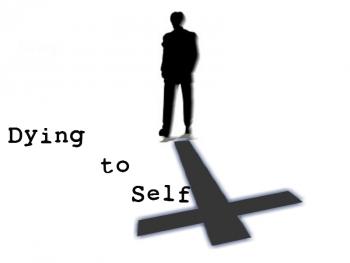 If you asked twenty good men today what they thought the highest of the virtues, nineteen of them would reply, Unselfishness. But if you had asked almost any of the great Christians of old, he would have replied, Love. You see what has happened? A negative term has been substituted for a positive, and this is of more than philological importance. The negative idea of Unselfishness carries with it the suggestion not primarily of securing good things for others, but of going without them ourselves, as if our abstinence and not their happiness was the important point. I do not think this is the Christian virtue of Love. The New Testament has lots to say about self-denial, but not about self-denial as an end in itself. We are told to deny ourselves and to take up our crosses in order that we may follow Christ; and nearly every description of what we shall ultimately find if we do so contains an appeal to desire. ~ CS Lewis, from The Weight of Glory

If I speak in the tongues of men and of angels, but have not love, I am a noisy gong or a clanging cymbal. And if I have prophetic powers, and understand all mysteries and all knowledge, and if I have all faith, so as to remove mountains, but have not love, I am nothing. If I give away all I have, and if I deliver up my body to be burned, but have not love, I gain nothing. … Love is patient and kind; love does not envy or boast; it is not arrogant or rude. It does not insist on its own way; it is not irritable or resentful; it does not rejoice at wrongdoing, but rejoices with the truth. Love bears all things, believes all things, hopes all things, endures all things. … Love never ends. As for prophecies, they will pass away; as for tongues, they will cease; as for knowledge, it will pass away. For we know in part and we prophesy in part, but when the perfect comes, the partial will pass away. When I was a child, I spoke like a child, I thought like a child, I reasoned like a child. When I became a man, I gave up childish ways. For now we see in a mirror dimly, but then face to face. Now I know in part; then I shall know fully, even as I have been fully known. … So now faith, hope, and love abide, these three; but the greatest of these is love.
~ Paul, The Least of The Apostles, in 1 Corinthians 13

Oh beloved, it is true.

There is, for each of us, a breaking point. Sometimes we just get so smacked around by life, that something in us wants to turn around and lash back at the people who have smacked us. No, it is not the normal (and even usually healthy) impulse we have to protect ourselves from danger. It is the actual desire that we can have to bring hurt to those who have hurt us.

This fool of a writer has recently come through about three of the toughest months of his life. And these three months were on top of three years that would have shook most people to the core. Culture shock, a third international move in four years, a second new language, relational strain beyond the ability for me to describe in words, and a special needs kid, have driven me to the very edge of my ability to cope with anything.

And then… we got laid off. In China. For basically no reason. And, no one even stood up for us within the “mission” organization we had joined. We were laying there, emotionally bleeding to death, and people just walked by on the other side of the path, holding their nose at the stench that had just been beaten out of us.

Many of us formerly lost boys understand abuse. We dealt it out on our families and friends. We also received it in portions that many of us cannot really bring to words. And, in times like this, the stress the arises in current trauma is also tied to the stuff that happened to us in the past.

Can we see it though?

There is a way through. And, it is the most revolutionary approach to things that has ever existed.

We have been hurt. And for us to deny that the hurts in our lives have happened is crazy. But, for us to think that continuing the cycle of hurt, by getting back at people is going to help, shows we are crazier than we ever imagine.

We don’t really want to hurt people. We desire something deeper. We don’t just want to stop hurting, we want to feel the fullness of being happy, healthy and free. And this is where Love comes in. Love is not just a wanting, or desire. Love is the the only path to gaining that for which we hope.

Love aches for the pain in the soul of the poor person who slaps us.

Love wants good for the person who is ignoring them.

Love hopes the best for the person who just fired them.

Love looks for ways to help the person who will not help them.

Love is this dying that brings life to others.

But, the weirdest part of this kind of dying, is that we do not lose anything. In pouring out our desire towards others; in truly desiring the best for those who may not even care about us, we find a wholeness to life that is beyond description.

So, are you hurting? It happens. And, there is no need to deny it. However, what you may be denying, and need to embrace, is that getting back at someone is going to make everything alright. Instead, join me in dying to the desire to hurt, and instead gain the desire to Love the one who hurts you.

Written by Makala Doulos: Makala Doulos is a child of G_d, a husband to his wife, a father to his children, and a teacher to his students. But mostly, he is a prisoner set free by Jesus. Love has invaded his life, crushed it, and made it new. Now, G_d’s Love is what constrains him to live in full surrender to the freedom The Father and Son and Holy Spirit have bought for us all. Grace and Peace to you all.

Daily Quote: Love is the profound concern for the wellbeing of another,
without regard to whether the other returns the favor.
~ Makala Barnabas Doulos